Get fresh music recommendations delivered to your inbox every Friday.
We've updated our Terms of Use. You can review the changes here.

by John Oliver and François Houle 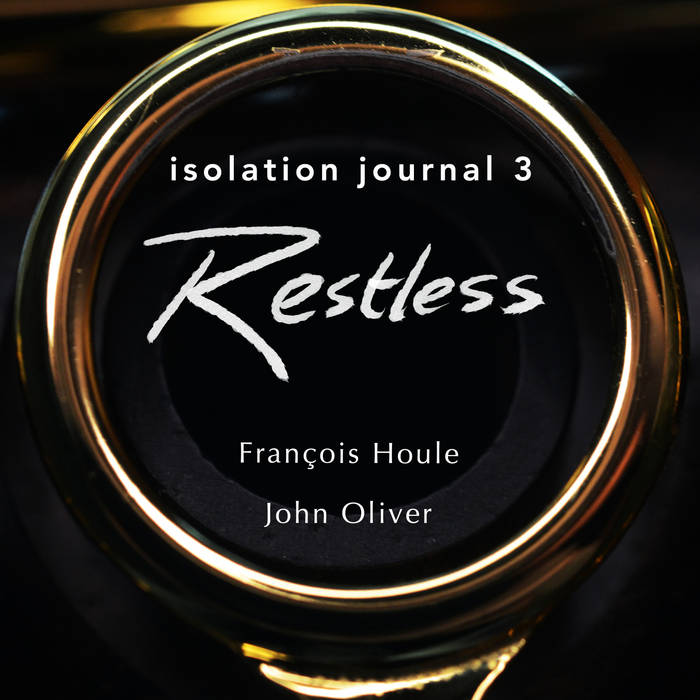 "…a heady listen with that distinctive Canadian acousmatic sound. Long waves of processed clarinet morph, mingle, and switch back upon themselves throughout their journey towards decay, only to be occasionally fractionalized (fractalized?) into shorter, spiker staccato bursts of white energy. Spectres and wisps of sounds past cavort and frolic along with a heavier, more metallic presence. All of these and more have a place in this multi-hued sonic place and the overall landscape creates a highly pleasurable tableau."
– avantmusicnews.com December 26, 2021

Isolation Journal is a series of duo albums conceived of and realized during the COVID-19 pandemic. "Restless" is the third in the series. Each album features the solo talent of a remarkable musician/improviser/composer, whose music John Oliver transforms into moving, spatialized, acousmatic compositions.

"When my old friend John Oliver called me to suggest doing this Isolation Journal project, I responded with an enthusiastic “yes!”. Having collaborated with John on a number of occasions over nearly 4 decades, I knew right away that this could turn into one of those special and rewarding musical endeavours. And he delivered, as usual. I simply sat at my studio workstation and recorded a series of short improvisations, based on a series of highly personal extended techniques I’ve acquired and refined over 50 years of playing the clarinet. The electroacoustic realizations that John created from these demonstrate an astute mind and ear, capturing some of the most idiosyncratic elements of my improvisational language and creating sonic gems from them. To give the listener some perspective on the subtle yet rich processing he generated, John included the original improvisations from which each piece is built. I hope you enjoy this work by one of Canada’s finest composers."

"François Houle was among my top friends whom I invited to collaborate on the creation of the Isolation Journal project. I invited him to record some solo material, entirely of his choosing, and send them along to me to undergo my sonic transformations. One afternoon in December 2020, François sat down with a microphone and recorded a collection of short improvisations, lasting from 30 to 90 seconds. No studio, no planning: just play. The results are an astonishing catalogue of François's creative toolbox. This album alternates these aphoristic micro-improvisations with my polyphonic spatial compositions that use only his recordings as the sonic material."

MAPL
Made in Canada

John Oliver would like to thank his subscribers on Bandcamp and on Patreon.

Oakland producer Mejiwahn chats about his breezy and transportive LP.